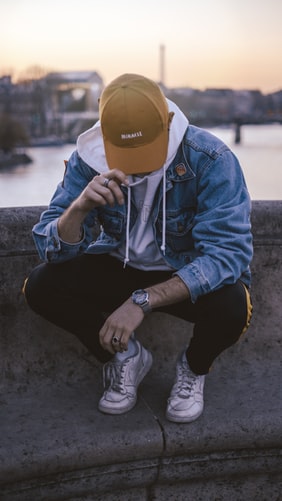 Time is short for each one of us, but not when we drape ourselves in a relationship, of a smile or a wave- to a relationship with someone unknown and so unfamiliar. Our heart gives ourselves to a sweeter and more humane string of love which is unexpected and strange. In a few minutes, we become familiar with someone so unknown, not by the virtue of their name, religion or caste but by the intuition and by the heart that fell for them.

This happens, when we move on the same route every day or visit a workshop or gym, we pass through a familiar face, and a smile appears automatically on our face. There is no verbal talk nor a handshake or hello, merely a smile or a wave.

Each morning on my way to the office, I would see a young man, with a brown hat, standing with his head bent on a bus stand. He would stand at the same place waiting for his bus, while I would cross him stealthily. He seemed to be in his mid-twenties and appeared a sophisticated gentleman. I would rarely change his position, whether it is hot, or raining. There was a certain sense of eccentricity in his personality and looks. I would look at him and he would slightly raise his head and smile at me. It would give me immense pleasure. What was so attractive about him, I was not able to comprehend.

Three years went by, not a single day would go by when I would not see him standing at the same place. That was a milliseconds moment, but it was nostalgic.

But that day was different. I reached the spot at the same time as usual, but alas! He was not there. I was so used to seeing him that it took me a few minutes to realize the man was not there. Maybe he is ill? I looked for him everywhere but found only a shoemaker and a few pedestrians. I took courage and asked the shoemaker about his whereabouts. Raising his eyelids, he replied, “No, I have not seen him today,” but yes he would get on bus number 102, of Plaza Street from here at 9:15 am. He would smile at each pedestrian who would pass by. He was a very kind man as he gave me more money for polishing his shoes. It was so surprising to me. Saddened I moved on.

After all, an attraction toward a stranger is natural. Isn’t it strange that a person whose name also we don’t know, can become so much important in our life? Whenever we go, we often come face to face with many people, and many of them would become so familiar. Those friendly gestures like a Shopkeeper nodding, the bus conductor greetings, or a woman paddling her toddler a giving beautiful smile as we cross her. Though they would be forgotten with time, these gestures and familiar faces are never missed. a very strange relationship.

Soon I forgot about the man like any other incident in life. A few months had passed, it was 22nd December and cold waves were blowing outside, so I decided to have a coffee. I went inside a coffee shop and ordered a coffee. Meanwhile, I started thinking of my project which I was due very soon. I was so engrossed in my thoughts that I didn’t know when a young man suddenly approached me. Shuddering his body, he sought permission to sit beside me. He was in his best outfit, a black shirt and grey pants with an overcoat. I could not recognize him, but I did not oppose him, sensing familiarity.

He started, “Hey buddy, haven’t you recognized me?” Surprised at this instant approach of a stranger, I nervously replied, “Well, I am sorry!” He then pulled out his brown hat from his pocket, wore it and with enthusiasm in his eyes again asked, “Now Miss.”!

He is now a Chief Investigating Officer in a crime branch of New York Police. But, at that time, he was undergoing training. He would stand at the bus stand to wait for his bus to go to Plaza Street, where his office was located; a well-planned and thoughtfully created “career ride”. He would be the only man who had dignified gentleness in him to give a smile to everyone around. Now his training had ended, and he had been posted at the head office of Downing Street. Today, was his holiday so ventured inside a coffee shop to find myself sipping my favourite cappuccino.

Oh! My Gosh!, I shrieked with joy, “Hey! It’s you, how are you? He smiled, and we both continue to chat, which becomes our never-ending rendezvous of love and trust.

in Stories
Nancy’s marriage and Me
in Romance
But Why Do Heart Breaks?