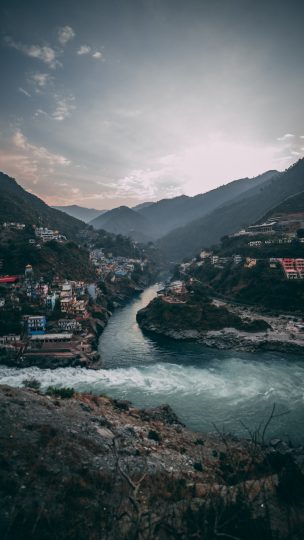 I had been standing at a podium with my eyes towards the audience whose faces had the veil of a smile over their hidden anguish; a dread of their originality that had been uprooted by the unscrupulous claws of the Government.

They had an authentic concern; their villages have been impacted by climate change, and their lives snatched. It was indiscrete deprivation from their very roots. They know only that the forests, trees and establishing eco-balance can impede the impact of this change.

In this concerned crowd I can also see a few familiar faces; Ramu Kaka, Niki Maussi and my childhood friend, Neenu. They are from my village and travelled 22 miles to listen to me, eyeing me with curiosity as I adjusted the mike.

The hall was big, and I could see the audience couched on their seats, some enjoying their share of the coolness of AC, while others were wiping the sweat from their forehead, as they were seated far end, where rays of the sun had poked through the opening of the window frame, bringing the height of temperature at peak.

I was a bit nervous; my legs were shaking, my head was straight and my body composure was perfect. It was a seminar on climate change, and I was invited to deliver the facts and my ideas on its impact of it on our life. I have been preparing my speech since last week; writing, revising and rewriting. And the moment had come when I would deliver it with force, bringing out all my apprehensions about the government’s policies, and our ingratitude activities at the cost of nature and the environment around us.

The clock was ticking, but my eyes were roving the crowd, looking for my friend and my partner in the activities that I had conducted, problems I had faced and the journey that made me take up the work to save our planet Earth.

Soon my eyes caught Reena sitting in the front row with Mr Brilesh who is a founder and chairman of the Tree Group, a non-government organization that is working with the tribals, educating them on the ways to conserve the forests. He has also worked with Greenbug which promotes eco-friendly products. Mr Brilesh had known Reena for the last few years and knows our work and things we had been doing all these years. He was so inspired by what we are doing for climate change that he invited us to this special seminar. Besides, several other dignitaries and students of various colleges and universities are also invited. Seeing Reena sitting there, I heaved a sigh of relief and felt motivated to speak.

Wiping the sweat, I started, good afternoon friends. I am glad to have this opportunity to let my heart open to the wounds that I, my family, friends and maybe all of you might be facing. Though I have been preparing my speech since last week yet today when my friend is in front of me, and my elders from my village with whom I have spent my childhood, I am filled with remorse. I have forgotten the words that I had learned by heart and wanted to deliver. Today my speech is not a judgment on anyone or situation and neither of the repercussions nor about the future, Instead, I wanted to share with you my story, yes my personal story, which is not just mine but ours. This is a story that we had together lived and shared.

I was born in a small village near Nainital in Uttarakhand. Many of you who are living in cities might not have heard this name as it is a very small village; you can say a hamlet.  It is surrounded by waterfalls, oak, pine and rhododendron forest and lush open pastures.

We were a joint family; my granddad, grandmother, father, mother, and three children; two brothers and me. I was the youngest of all three. Our house was the biggest in the village. My grandfather was a farmer, with enough agricultural land, where organic vegetables were grown. He had also fruit trees of plum, citrus fruits, watermelon, grapes and many other trees in his garden, which were all full grown. So we were surrounded by life, which was green, beautiful and so serene.

The best part was its nearness to the River Kosi. We would wake to the sound of the gushing river, chirping birds, and the cuckoo of our hen. My grandfather would only call our names once exactly at 4, and we would all jump off our bed even before the sun has even risen.

One by one we would go out, in an open lobby to fill our bucket from a hand pump, which was our sole property to shower and freshen up. We would then move with our father to our terraced fields. Sun would start spreading its rays. We would hop and run through these golden routes, which was a nostalgic experience.

After a few hours in the fields, we would get back to have breakfast which constitutes Baadi, Bhatt ki Churkani etc.  That would be the best and most healthy diet we would all cherish, and then off to school.

Our grandfather loved his work and was so emotionally attached to his land, that he could never even think of selling it. Even if somebody mistakenly used the word sell, all hell would break loose and he would get irritated. The land and farm were his children, he would always say, “You are because you are born on this earth, and this is our mother, picking sand from the ground.”

Once, my father, Jamna Lal threw the bombshell, he was of a different mentality and appeared as if not his father’s product but the blood of materialistic minds. He summoned us all to his living room; the purpose was to sell half a portion of our land, which had fruit trees. He says, “This time we didn’t get enough produce as you all know heavy rains have spoiled the growth, and little what we have would not give us enough yield. We also have to repay the loans, as interest will keep on getting heavier. So it is in our interest that we sell the land. We will give this land to the government, which has brought many wonderful schemes. We will gain from it.

But my grandfather’s face went blue with anger, “Whatever happens, I won’t sell my land to anyone, this is my world and no one can snatch my life from me”. The father-son duo didn’t talk with each other for many days.

But inevitable happened. I heard from the villagers that the MLA of the village, Roshan Lal is going to give another blow to my dream, the land. He intended to cut more than one lakh trees to give the urbanized shape to the village. Besides, they are also planning the construction of the mill across the river and broadening of the highway that passes near our village.” Doomsday has come”, voices were heard from the elders of the Village. It would be our turn next, Ramu Kaka reciprocated.

Ramu Kaka’s concern was genuine. Within a few days, I must have been 15 years old then, and government officers approached

our village head with a scheme, it intended to buy a few acres of land from each farmer in the village, and, construct the government building for storing the grains, the farmers produce and in return farmers would be paid as per their growth. This would resolve most of the farmer’s problems. A few acres of the village land, in which our land would also come, would be used to set up resorts to boost tourism. The deal was lucrative and the promise gave us and the simple folks hope. All were happy, as these schemes mean development and more earnings for them.

But, it would also mean the loss of our tiny forest, the land. Within a couple of days, my grandfather returned from the fields heartbroken. The government is going to acquire our land, our little world to build a resort. As the land was near the river so it would give a beautiful view from the resort, an ideal location for the government to make it a tourist destination. In return, the government would give handsome money to my grandfather and promise of planting more trees instead of the broken ones.

My heart broke, legs started shaking as the trees on which we would climb, pluck the fruits, and play hide n seek, which were our soul, was going to be axed. I also remembered a day while playing in a forest we had rescued a deer that was stuck in a fence. We were so very amused by the way the deer reacted when released. He began to hop and run in joy around us. He became our friend, we would also run, hop, and zigzag through the green grasslands near the river, where sea birds fly, flutter and shoot in the river to catch the fish. Over the other end of the river, at the North West, there was a forest, which was inhabited by leopards, snakes, elephants, wolves and many other animals.  We would often hear the voice of wolves at night, scared we would slip into our mother’s bed. I heard one of the villagers also say, most of that forest would also be cut to make a way for the roads and some buildings. It left me wondering, where would the animals go?

I ran into the laps of my grandfather who was by then resting in his chair, and hid my face in his lap.

The next morning we woke up very late. I was surprised that we had not been woken up by our grandfather, no call of the cuckoo, no chirping of birds, no running of the squirrels and that naughty monkey who would often take away my grandfather’s cap but would return it. Now our monkey whom we had named, Chaman was sitting silently on the boundary wall of our home that touched our little orchard.

I looked in the direction, from where gurh noise was coming. All the birds were flowing away, squirrels had started running hither and thither in desperation. The sky had turned dark and there was gloom everywhere. Our orchard was getting slashed, killed, and axed by the big rolling machines. Tears began to roll down my cheeks.

I ran inside only to hear mourning from the grandfather’s room, which was located on the other side of the kitchen that opened towards his farm. I saw he was wrapped in white cloth and my mother, and dad were weeping. My brothers were sitting silently and the villagers were mourning the sudden death of my grandfather.

And now after ten years when I went back to my village, I could still see my grandfather tilling his remaining land, and sometimes feeding his animals.

But our village now housed hotels, resorts, and restaurants. Tourists of all shades and colours are delving themselves into each bit of its remaining air. There are now mobile phones, but no communications; money and nightlife but no love; vehicles are plying but the sound of our Ramu Kaka’s walking stick is missing. People are enjoying and living in leisure, but they hardly know what was there is dead.