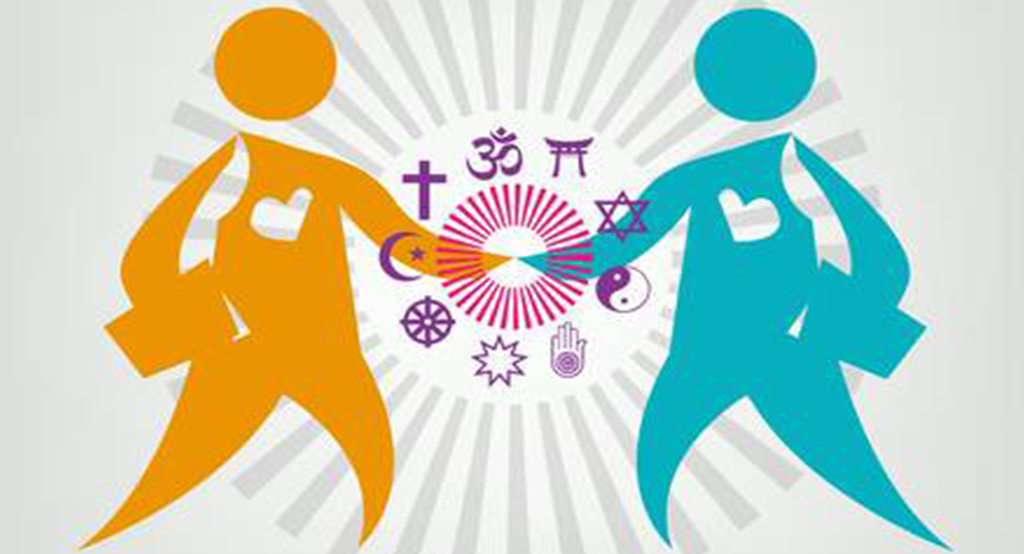 “What I am doing is right as my Religion is right, but yours wrong”, this we often hear among our own people, but who are following different religious beliefs, faiths or identities, then your own. These words bear testimony to the egoistic tendency that we hold for our religion without actually understanding to what we are actually saying.

From the birth, we have been so clutched in the jargon of our own religion that we determine others beliefs with the sarcastic nodes of our perceptions, which bears no valid ground. How much our lip utter words of tolerance but somewhere in our heart we cannot bear religious testament of others.. Our belief would never accept the traits that are held so important in other religious beliefs and faiths which are so many, so beautiful with many wonderful and unimaginable things. I remember a dialogue in a popular Bollywood movie, “Munna Bhai”, “Chemical Locha hei re bhai”, a chemical imbalance in mind which prefixes the mentality of the human‘s mind in their own religious parameters, which causes contradictions, but it is more than this lotcha, it is religious rigidness, which takes the form of dogmatism.

Why my religion is right and yours is wrong, these are some possibly perceived reasons:

My religion is very old and is based on our scriptures

They are centuries old and the religious scriptures are written by their own Gods or religious head so their religion is right. Bible, Koran or Bhagavad Gita to name just the few are written centuries back. We can transcribe Bible to around 3500 years back when no writing was done. The words were then passed down to Moses around 1500 BC.

As per the traditional Islamic beliefs, “The Quran was revealed to Muhammad, during the month of Ramadan in 610 AD, when at the age of forty, he received the revelation from the angel Gabriel to inscribe the messages from God to mankind.”Since then Quran is a highly revered religious scripture.

Bhagavad Gita was written somewhere between 400 BCE and 200 CE and is known as the “Song of the Lord”.  The credit to this text was given to a man named Vyasa.

Among these Bhagavad Gita is very old and so per the believers of Bhagavad Gita who are mostly Hindus, their faith and religion is right, Christians and Muslims thinks otherwise, and here the contradictions arise as for them these religious books Koran and Bible are the holiest and what is in them, is what they should follow and is actually right.

I am born in this religion or faith which is passed down to me from my ancestors, my grandfather had entered in this faith and so this is highly revered. And over and above millions of people believe this religion so whatever we follow and whatever is our belief and faith is right.

We do not do kill animals

In some religions killing of animals are prohibited, so they claim their religions are so good and pure, but in many killing of animals is traditional revered. The cow is killed and eaten with religious fervor by the Muslims? Goats are sacrificed in many faiths in Hinduism at the altar of Gods. Horns of the bulls are put to fire in the name of culture and tradition. So in all this which religion is right or which is wrong, this causes the eruption of paradoxical crises, as here morality comes in question?

My God told me to follow it so I am following

This I have heard it from many people that my guru told me to wear a rudraksha Mala (A religious thread) every day and offer milk in the temple. This is a direct order from God so I would follow it without questioning till my death and this is what we should all do and is absolutely right. And without questioning, we follow it.

Our religion is so mysterious and beautiful

In each religion, there is some mysterious element which is beyond our level of understanding and of science, but which is very beautiful. This mystery attracts more towards the divinity and God which makes us to move more close to our faith. We began to believe if it is mysterious it must be divine and so is given highest accord.

There are many more reasons that give rise to the notion of other religions or faith as wrong and ours is right. This is a reason why communal disharmony becomes so dominant among religious fanatics that it gives rise to hatred and blood sheds. They are psychologically so prefixed within the set veils of their religious dictates that they are not able to see what’s happening outside the veils and what is right or what is wrong?

Bertrand Russel on God and Religion says, “I think all the great religions of the world – Buddhism, Hinduism, Christianity, Islam, and Communism – both untrue and harmful. It is evident as a matter of logic that, since they disagree, not more than one of them can be true.”

In the grounds of these perplexing crises, the solution is the knowledge, not of any other but own religion. Whatever we say, it is because of ignorance or partial knowledge we have of own religion which causes boasting, intolerance and sarcastic behavior. So the solution is getting, gaining, giving and receiving of the knowledge that can shed the dogmatic perspective, clean the Chemical Locha and purifies our mind. It would then be laced with love and tolerance, the love that is beyond any religiosity and takes the humans in ecstasy.

What else we can say, as this is a love that we all see. These are my views of what I have seen and experience, which may not be acceptable to many but please do express your opinion, it might be possible that somewhere down the line these religious dried sardonic Lochas are treated and we can change the world.

We are also threatened when we think another religious belief is in direct contradiction with our own. This is usually on some moral ground, and applies to the non-religious as well. If I think murder is wrong, which is line with my religion, then any religion or non-believer that allows the practice of murder in any form – abortion, killing non-believers, infanticide – would be going against what I believe. Even in less extreme cases, such as lying, if one religion teaches lying is always wrong, and another says it is acceptable in certain situations, there is also a conflict of morals. We don’t want the wrong things to be taught to others, because if they are led astray, it can affect more than just them.

hree passins, simple but overwhelmingly strong, have governed my life: the longing for love, the search for knowledge, and unbearable pity for the suffering of mankind. These passions, like great winds, have blown me hither and thither, in a wayward course, over a great ocean of anguish, reaching to the very verge of despair.

I have sought love, first, because it brings ecstasy – ecstasy so great that I would often have sacrificed all the rest of life for a few hours of this joy. I have sought it, next, because it relieves loneliness – that terrible loneliness in which one shivering consciousness looks over the rim of the world into the cold unfathomable lifeless abyss. I have sought it finally, because in the union of love I have seen, in a mystic miniature, the prefiguring vision of the heaven that saints and poets have imagined. This is what I sought, and though it might seem too good for human life, this is what – at last – I have found

hree passions, simple but overwhelmingly strong, have governed my life: the longing for love, the search for knowledge, and unbearable pity for the suffering of mankind. These passions, like great winds, have blown me hither and thither, in a wayward course, over a great ocean of anguish, reaching to the very verge of despair.

I have sought love, first, because it brings ecstasy – ecstasy so great that I would often have sacrificed all the rest of life for a few hours of this joy. I have sought it, next, because it relieves loneliness – that terrible loneliness in which one shivering consciousness looks over the rim of the world into the cold unfathomable lifeless abyss. I have sought it finally, because in the union of love I have seen, in a mystic miniature, the prefiguring vision of the heaven that saints and poets have imagined. This is what I sought, and though it might seem too good for human life, this is what – at last – I have found.

With equal passion I have sought knowledge. I have wished to understand the hearts of men. I have wished to know why the stars shine. And I have tried to apprehend the Pythagorean power by which number holds sway above the flux. A little of this, but not much, I have achieved.

Love and knowledge, so far as they were possible, led upward toward the heavens. But always pity brought me back to earth. Echoes of cries of pain reverberate in my heart. Children in famine, victims tortured by oppressors, helpless old people a hated burden to their sons, and the whole world of loneliness, poverty, and pain make a mockery of what human life should be. I long to alleviate this evil, but I canno Other religious heads calls Christians and Islam evil, reasons everyone knows, as both these most dominating religions are always adopting coaxing ways to bring the people from the other religious faiths in their fold. For Christians and Islams, their religions are great, and we should shed our own robes of religious identities to follow their labeled Gods. They think it is their duty to make sure all humans should believe in Jesus. It is like injecting us with an unnecessary drug, as I am already prefixed in my own religious setup. Mine religion is as good as I am or my name

in Religion
Why Religious Rituals Matters? My Experience with God !
in Religion
What is India now, a Secular or Majoritarianism nation?
in Religion
Is there a cure of Coronavirus in religion?