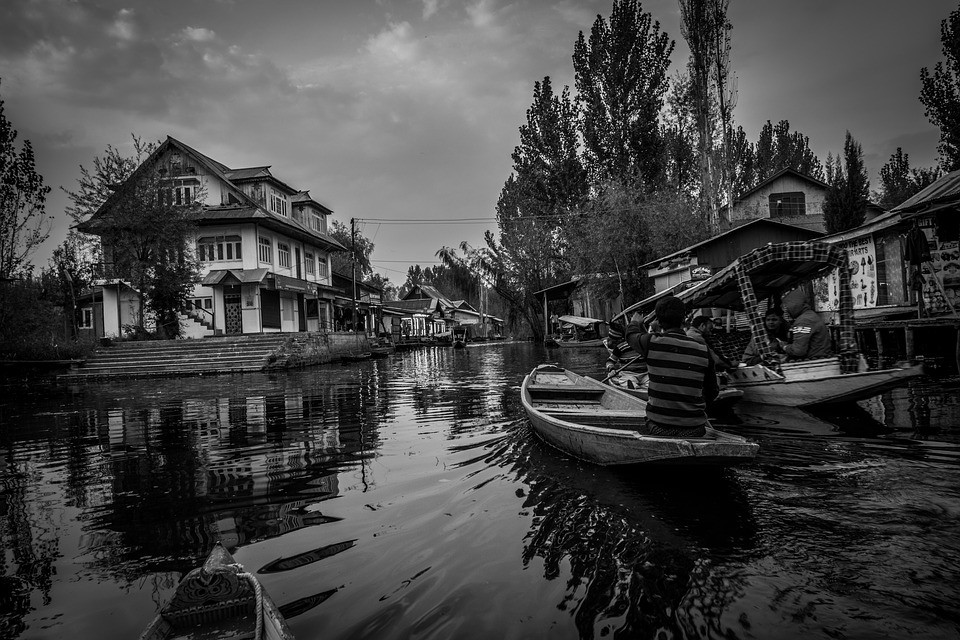 If I get a time machine, I would go back to 1960, to the land of Jahangir’s dream- A true paradise, so pure and serene, with no hatred, crime, or bloodshed. I wanna close my eyes and feel the exotic sound of river Jhelum and immerse myself in the depth of morning rays over the valley, and feel ecstatic by looking at the beautiful and fair women in their colourful pherans emerging out of their cottages to take their sheep for rearing.

I was living with my dad near Lal Chawk in Srinagar. My days would pass easily without any fictional overdose of Information Technology or the corporate manufactured food or fruits. I would pluck red fresh cherries and plums from the orchards, and cherish their taste. My time was mostly spend ferrying through the Jhelum, or getting a Shikara ride at Dal Lake. I would shake hands with the red, white, pink, aficionados from across the world, whosoever would pamper us.

When I would walk holding hands with my dad for shopping at The Bund, we would receive a pleasant smile and a welcoming gesture. There was cordiality in its very aura, girls and ladies would walk alone without fear, and we could feel that aromatic love in the eyes of “Kashmir Ke Kali” which was folded in the fantasy of Indian nationalism, an untethered essence of India with least touch of westernization and modernistic tenacity of cities.

Hindi films would continue to use wonderstruck landscapes to build the eccentric doze of romanticism and love. Houseboats in Dal Lake would fathom with tourists and boats loaded with flowers, sail through the translucent lake luring tourists to buy their bounties.

But underneath this air of peace, a smoke had started to flair in the hearts of Kashmiris. It was an uncharted feeling of despair or some impended fear. Suddenly, a visitor or tourist from any part of India had become an “Indian” and the locals became Kashmiris, but there was no bitterness or accusatory tone. We could just hear some titbits of snide comments which could be laughed off. And as the eighties of Rajesh Khanna’s era was going to end, those tender hearts behind the pherans converted to infrared fire in which now Kashmir was going to burn,

Within the Pherans Islamization and Hindustic phobia had started their ugly turns, bureaucratic wives of Kashmiri Pandits would quite often sarcastically make communalistic remarks,” Well we are Hindus that’s why he is not selling us.” Mir Mohammad would not sell his surrealistic drawn paintings to anyone. A few years passed my dad got transferred to Delhi, and we were shifted to the capital, in the laps of bureaucratic doors.

In 1980, I revisited Kashmir, but now I could feel some strange occurring. I walked towards the same The Bund its atmosphere was now changed, a hidden façade in the vagaries of doom. Some shopkeepers were now seething with anguish. People were now wearing western outfits, displaying a peculiar type of alienation.  The street was giving a nauseating scene of different types of dingy houses and that too over the river embankments. The embankment law was unnecessarily trampled with shabby structures creating havoc on the wonderful river line.  In the 1960s, cycling was also banned on this stretch, police officials would immediately catch a violator and deflate the tyres but now we can see cars piling up on the complete stretch of the Bund and the truckloads of building materials and stuff are moving.

I proceed towards a shop, where I would often go to buy my special Kashmiri sweet, Shufta. It was so yummy. My dad would often chit-chat with the shop owner. I would call him Chacha Ji and he would give atleast one complementary shufta to me. But that day was different, instead of Chacha Ji, another man, young in height, and innocent face was standing at the counter. I assumed he did not like my sudden intrusion, but anyhow I continued.

I asked, “Where is Chacha Ji”, surprisingly he looked at him.

“He doesn’t come to the shop nowadays”

I was aghast, and after repeated requests, he agreed to tell me. “It was Friday and he was going for a Namaz at a mosque nearby, the roads were almost empty as it was raining. There was hardly anyone. We could only hear the noise of his footsteps. Suddenly out of nowhere, a man came running towards him and fell at his feet. A bullet had hit him on his chest and the blood split like water on the ground mixing with the mud. My father stood deadlocked. When he came to his senses and looked at him, the man was dead.  He was none other than his elder son, Yusuf who had gone missing three years back.

This incident left him mentally distorted. From that day onwards he would just sit in front of his window, and look at the dead silence, hear the gunshots, watch the army running here and there and young boys shouting slogans.

But this is not an end; every now and then Indian army would forcibly enter our home, and trouble him more with questions, and one day they even ransacked our belongings.

“It”s terrible”! I could not get any words to say

I met several other locals, and whomsoever I met, had one or the other story to narrate; the story of bruises, human rights violations, turbulence, grenades, and torture of the Kashmiri Pandits.

But I would never forget my days in the 1960s-80s Kashmir- A Kashmir of love, dreams, and romance.  It was the Kashmir where women would walk without fear but in simplicity, grace and shyness.

It is an unending story of Kashmir, travails of bitterness, a sarcastic version of so naturally heaven, but it’s a god’s land and is and will remain so serene and so beautiful.